We are replacing some top-level nodes (images, iframes etc) with a node view, in order to be able to show some UI (e.g. a close button).

However it seems like there’s an issue with the drop cursor plugin that calls .nodeDOM on the node which just returns null for node views, which then promptly crashes.

Is that a known issue? Should we work around that?

view.nodeDOM should work on nodes rendered with a node view too. Is this something that can be reproduced in a small script?

The docs do say that it would return null if the node is inside an opaque node view though:

May return null when the position doesn’t point in front of a node or if the node is inside an opaque node view.

True, but this position is coming from the cursor. Are you somehow setting the cursor position in a non-drawn node?

The way we reproduce is a bit more complicated since it might be some peculiarity of our schema, but it ends up like this:

More info: The traceback is actually caused after the document is updated:

That is, the updateOverlay method as called by the update method after a transaction is dispatched and the updated state is set to the view (via .updateState)

And it gets even more weird in the debugger. At this point, the cursor should (in my head) be removed - the drop is over. before and after are both falsey (well, before is null and after seems to be not available, whatever that means. I’m not sure I’m using the watch expressions correctly. 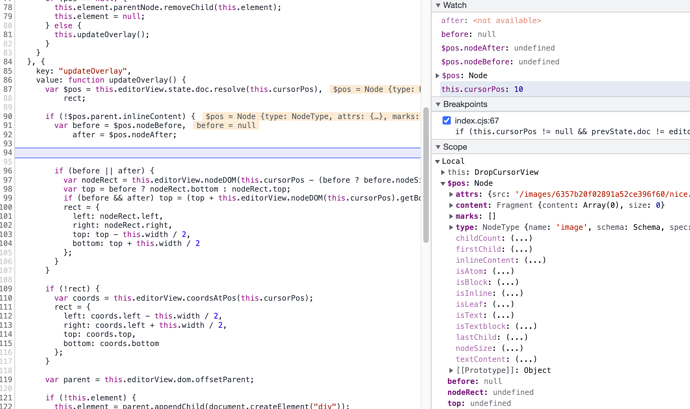 But indeed, if I understand correctly - the cursorPos is pointing to the image Node, which is indeed not rendered in the editor since it’s rendered by the NodeView (the figure), which is why nodeDOM returns null.

@marijn Getting a minimal repro is a bit tough, I hope the info I provided helps - if not, please let me know and I’ll dedicate some more time to it. Thanks for your attention!

I guess that cast there is dodgy regardless, and it should be okay to just not take that branch when null is returned. This patch does that.

FIX: Fix a crash when there's no DOM for the node next to the drag position. Se…e https://discuss.prosemirror.net/t/dropcursor-bug-with-nodeviews/4977

Thanks, this does fix the bug. Much appreciated!