So you have a website with <textarea>s and you need them turned into WYSIWYG areas with markdown support. You’ve probably stumbled upon ProseMirror, only to realize that it’s quite an orchestra, requiring far more skills than you have in a technology that you’re possibly not even that familiar with. That’s because ProseMirror is a fantastically well thought-out piece of software that defies simplification.

ProseArea is the campsite guitar cover song version of the classical work of art that is ProseMirror. 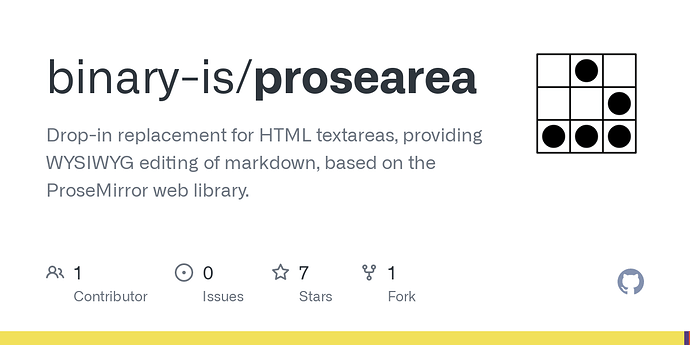 What follows is the README:

ProseArea is a drop-in replacement for HTML textareas, providing WYSIWYG editing of markdown, based on the ProseMirror web library.

If you only want to start using ProseArea to turn textareas on your webpage to fully-functional WYSIWYG editors spouting out beautiful markdown, then everything you need is in public/js.

To see how to use it, take a look at public/demo.html for an example of how to convert HTML textareas into WYSIWYG/markdown editors.

Once a textarea has been turned into a WYSIWYG editor, you can read and write its content through the regular value property of the textarea, as shown in the example (public/demo.html). On GET and POST submissions, the editor’s content will be delivered in markdown format with the textarea’s name as a variable.

One of ProseArea’s most important design goals is ease-of-use without in-depth knowledge of ProseMirror. If you have any kind of trouble using ProseArea, please let the authors know, since that indicates a need to make it even simpler.

When ProseArea is applied to a <textarea/> (as per public/demo.html), it gains the CSS class prosearea-instance, which you can use to apply your own styles to it.

In particular, if you are applying it to already existing web designs, you might want to play around with CSS styles display, float, and dimension styles such as max-width. This is because ProseArea turns <textarea/> nodes into <div/> nodes, which behave differently with regard to available space and such.

ProseArea is developed using Node.js, which you are expected to be at least mildly familiar with.

You need yarn (or at least npm) and rollup installed to build ProseArea.

Note that building is not necessary if you just want to start using it. You only need to do this if you want to play around with the code or partake in ProseArea’s development.

Distributed under the MIT license as detailed in the file LICENSE.

Looks great—I’m glad someone is filling this niche. Hope it takes off.